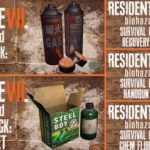 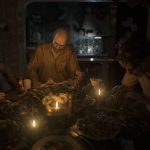 Usually such big games as the upcoming Resident Evil VII has microtransactions but RE7 seem to be different this time. This information was confirmed via the official Resident Evil 7 Twitter account with the following tweet saying: “Here are the retail pre-order in game bonus items! But no micro-transactions will be featured in #RE7!” Game publishers also confirmed information about preorder bonuses that appeared some weeks before.

What is more, a bunch of new Resident Evil VII screenshots was released by Capcom portraying the dim and mystical Baker family in their home surroundings. One of these images shows Baker family gathered by a dinner table with an ugly-looking food on it. The second image shows an abandoned room with a demolished wall disclosing a light shining through. Capcom tweeted these images of Resident Evil 7 with the following words: “Would you join The Baker family for dinner? And what about that wall..?”

Resident Evil VII is planned to be released on January 24, 2017. RE7 will be available for Xbox One, PlayStation 4 and PC. Those game fans who will preorder Resident Evil VII Deluxe edition (it costs $80) will get two extra pieces of content, including 4 short stories and bonus episode to the main Resident Evil 7 game.